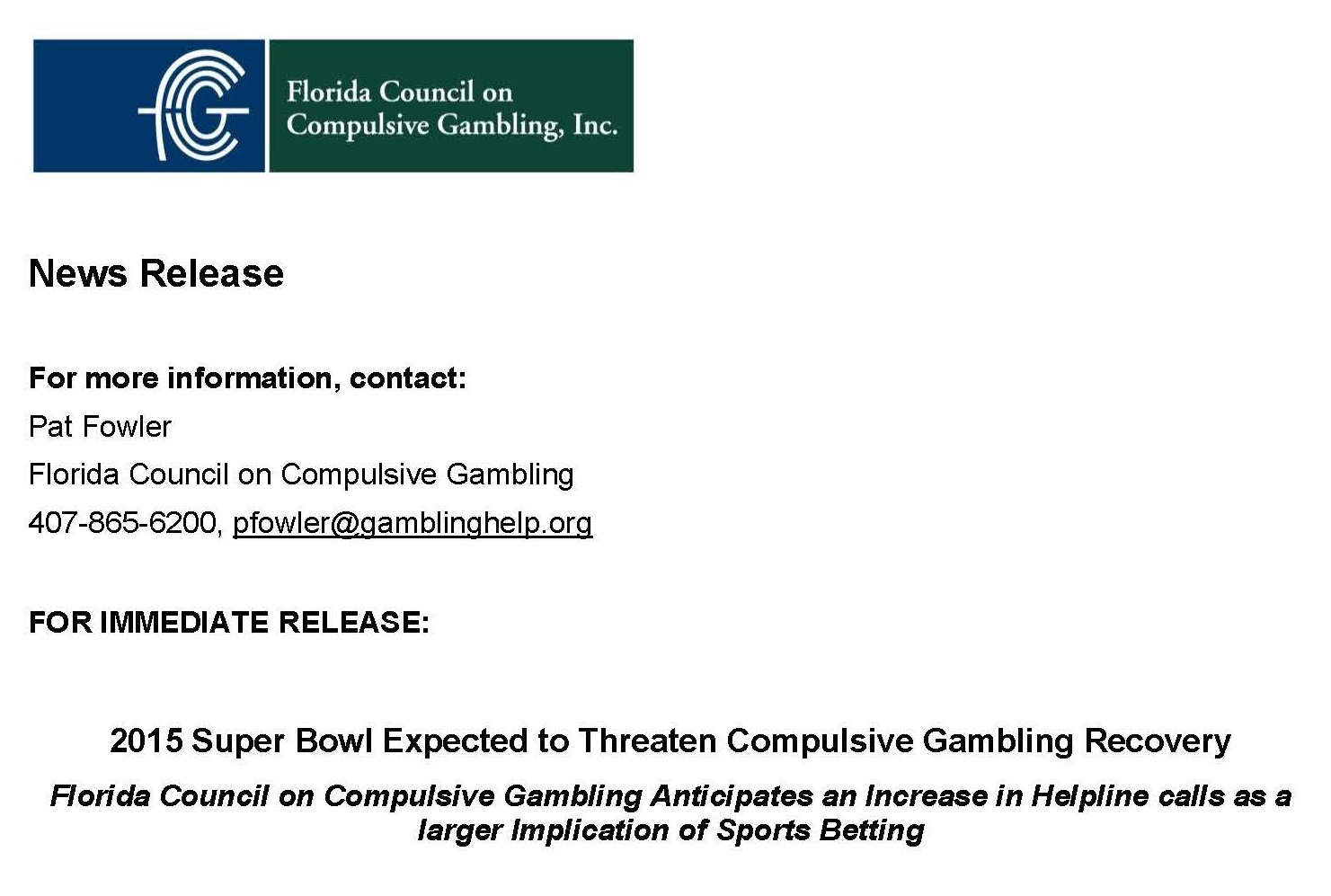 Orlando, FL (January 29, 2015)– The New England Patriots and the Seattle Seahawks are meeting at the Super Bowl this Sunday, February 1st, but the Florida Council on Compulsive Gambling (FCCG) is preparing for a different kind of confrontation: the battle between recovering compulsive gamblers and the temptation to bet on one of the most lucrative sporting events of the year.

This year, legal wagering on the Super Bowl in Las Vegas is expected to exceed $100 million. During this time, there are very few places where compulsive gamblers can feel safe from the urge to gamble. But the wagering won’t be limited to Las Vegas. According to a 2012 FBI report, U.S. businesses can expect to experience an $800 million loss from diminished work productivity as a result of popular Super Bowl betting pools. But illegal wagering isn’t limited to offices, sports bars and living rooms - with an estimated $3.8 billion that will be wagered illegally on February 1st, illegal gambling and the subsequent threats to compulsive gambling recovery are a pervasive issue.

“With the hype from the media, friends and families surrounding the big game, their team and their predictions, compulsive gamblers can have an extremely difficult time resisting the temptation to bet before and during the Super Bowl,” said the Executive Director of the FCCG. “We know that many gamblers view the Super Bowl as their last chance to make up for the losses they have incurred throughout the year, but this unrealistic thinking can have a lasting impact on them, their jobs and businesses, their family, as well as their friends.”

Counselors at FCCG refer to the influx of helpline callers following the Super Bowl as ‘Super Bowl Monday’. According to statistics from calls to the FCCG HelpLine, 75% percent of gamblers are affected by depression and 80% percent are experiencing anxiety. Suicidal ideations and/or attempts were confirmed in 22% percent of those who called. It is estimated that 1 out of every 5 pathological gamblers will attempt suicide.

“Compulsive gambling affects not only the compulsive gambler, but can have adverse affects to on the family and the surrounding community” stated the Executive Director. “That’s why we are urging Floridians to join us in raising awareness for their affected coworkers, friends and family during critical events, such as the Super Bowl, for problem gamblers.”

Whether placing your money on prop bets or point spreads, FCCG urges friends, family and coworkers to be sensitive to the temptation and needs of the compulsive gamblers around them and to take special consideration for silent victims who they may not be aware of.

The FCCG HelpLine, 1-888-ADMIT-IT, is available 24 hours a day to help compulsive gamblers, their families and friends. The HelpLine offers resources and assistance from trained Specialists.  If you or someone you know has a gambling problem, help is available at 1-888-ADMIT-IT, www.gamblinghelp.org or by anonymously texting 321-978-0555.

The Florida Council on Compulsive Gambling: The Florida Council on Compulsive Gambling is a not-for-profit 501(c)(3) organization that provides information, resource referrals, and support services for problem gamblers, their families, employers and others.  We also offer prevention and education programs, as well as professional training for mental health, addiction and medical practitioners, gambling operators, governments, businesses, academia, law enforcement authorities, faith based organizations, and others.

Built With ♥ By: Christopher Allison

Helpline is available 24 hours a day